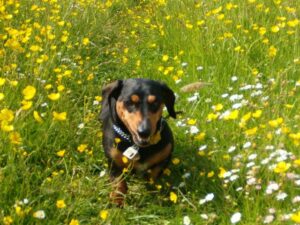 I received the sad news on the 2nd October that Bentley Crabtree had passed away.  He was a great little character in the village and will be sadly missed by both human and canine friends. He worked as a Reporter on the 2012 Rathmell Rovers Calendar and again most recently on the new 2014 Calendar. We will remember him with affection next September, the month in which he is featured.

His owners, Rosemary and Richard wrote:

“As you can imagine we are so devastated, he was always more than ‘just a dog’ he was a little person in a dog skin.

We have climbed many mountains with his various health problems, but he always remained good-natured and loving whatever he had to endure.

How can such a small dog leave such heartbreak and sorrow at his passing? Wherever we went with him he made friends, his fan club was immense and the gap he leaves behind is impossible to fill. We have a Beech tree in the garden planted in memory of our eldest daughter and there we will lay him to rest.”