Those of you with long memories will remember that, way back in 2009, BT conducted a survey that revealed the under-use of the red phone box in Rathmell. We were informed that a decision had been made to remove the telephony and the phone box. 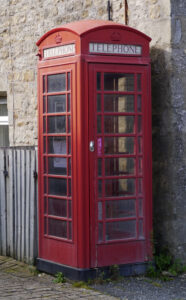 As a result of the views of the majority of parishioners, the parish council decided to pursue the process whereby the box could be adopted. Various alternative uses were canvassed, including use as a book swap, an information centre for local walks, an art gallery for work from the primary school and seasonal decoration.

Legal complications involving the ownership of the land under the phone box were finally resolved, but the UK Land Registry required a statement from BT’s legal department that BT had no interest in that land.

This resulted in a statement from BT that the red phone box was listed and that they had no intention of removing it, or the telephony within it.

The parish council responded. We asked that, if this were the case, would BT please repair the phone box and replace the light bulb, which had failed.

Joyously, this has been done. The phone box is lit up, weather-proof, running and ready for use.

So please use it!