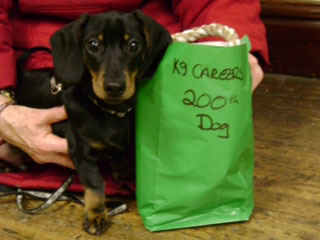 On Saturday 22 February 2014 Margaret Swift and Vanessa Stone organised a Coffee Morning to celebrate a productive year for the Rathmell Rovers 2014 Calendar. Villagers came along to congratulate the crew who initiated and implemented the project. A very surprised four legged visitor, namely Rafferty Crabtree was invited to write a Rovers report for the Craven Herald and this website and we print his ‘ramblings’ here, as his keeper Rosemary calls them. Rafferty is a lucky 4 month old Miniature Dachshund who came to live with the Crabtrees after their sad loss of Bentley, our previous Rovers Reporter. So not wanting to steal his thunder this is Rafferty’s report.

Everyone seemed pleased to meet me and it is an honour to report on the morning’s events, even though I was only a twinkle in my breeder’s eye while this was in production.Well, it was not what I had expected – last time I was in the Rathmell Reading Room I was presented with a big green bag full of surprises –  fame had suddenly arrived, I was only four months old and there I was on Facebook (a territory completely out of bounds and understanding to my keepers) Actually, I was just lucky enough to be the 200th dog through the door of Brenda Johnston’s k9careers puppy class; she was expecting it to be a Labrador, not a Miniature Dachshund, but I can think BIG even if I have to stay small.Anyway, back to today (Saturday 22 February 2014), there seem to be a lot of talk about Rathmell Rovers – was it a football team? – was I about to be paid £300,000 per week and then I remembered, my name is Rafferty, not Rooney. Someone introduced me to the assembled throng as the successor to Bentley who had written articles about Calendars and it was suggested that I might like to put paws to paper and fill the vacancy as the Rathmell Rover Reporter. What a responsibility, anyway all dachshunds like a challenge and I feel I can fit that bill.

I am so impressed with what has been achieved by the Rathmell Rovers, especially as they kept their coats on all the time! I understand that the calendar has travelled the world and can be seen in countries as far away as Canada and Australia. The sales of this edition have raised over £1,100 and resulted in the presentation today of cheques of £550 each to the following good causes. Ruth Evans accepted one on behalf of the Yorkshire Air Ambulance and Sue Marshall and Elaine Illingworth received the other, on behalf of the Rathmell Reading Room.

Presentation to Ruth Evans on behalf of the Yorkshire Air Ambulance 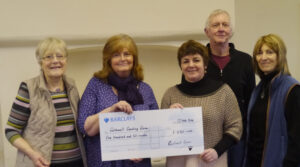 Vanessa Stone thanked everyone for all their support: Brian Scott for his patience and expertise in taking the photographs of so many different dogs. Margaret Swift for the splendid graphic design work and overseeing the project. Sally Birkin for the lovely posters and flyers. The Craven Herald, Rathmell Web-site and the local pubs for advertising the publication and finally everyone who had helped to sell so many copies. Last but not least, the models and their minders who made sure they were all bright and beautiful for their photo shoots, not a muddy paw or scent of eau-de-fox in evidence. Margaret Swift then thanked Vanessa for everything she had done to make this second calendar as great a success as the first edition. Sadly, Ember Rees (February) and Bentley Crabtree (September) are no longer with us but have left their mark on the pages of Rathmell Rovers 2014. I have met some of the pin-ups already on my walks and look forward to joining in the village activities, as it seems that Rathmell is a pretty good place in which to live. It certainly is “ Dog Friendly”.