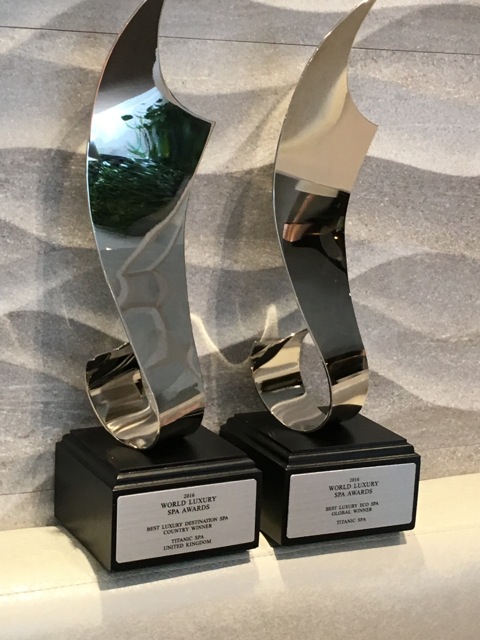 Titanic Spa has won the supreme accolade of Global Winner in the World Luxury Spa Awards. After success in 2015 and 2016 as the Best Destination Spa in UK, 2016 has seen the West Yorkshire based facility going one better and achieving recognition as the World’s Best Luxury Eco Spa.  The award, which is based on a voting poll of Spa visitors and industry consultants, was presented to the company at a ceremony staged in a Spa Resort in the Swiss Alps.

Titanic Spa was opened in 2006 when Rathmell inhabitant David Wilkinson purchased the huge textile mill in Huddersfield known locally as Titanic Mill, the name coming from the fact that it was built in 1911, the same year as the eponymous ocean liner, and that it was also such a large structure. To start with the mill was developed as a Day Spa and 139 apartments. Since then the Spa business has developed rapidly to include a wide range of Spa facilities and treatment rooms, together with 35 luxury apartments providing accommodation for the Spa visitors.

David Wilkinson has had a long career in property development and management prior to this latest venture. He has lived for many years in Rathmell with his wife Lynne (nee Garnett), who was born in Rathmell and whose family over successive generations have been influential in the local community in terms of business and property, providing both employment and housing for local people over several decades. Both David and Lynne have for many years been active in the local community, not least with this website, which has for the last three years received generous sponsorship from Titanic Spa.

David, who one would conservatively think must at least be approaching retirement age, is Chairman of Titanic Spa and thus  finding life fairly busy with this rapidly expanding new enterprise. He regards the success of the business as the result of a lot of hard work by himself , his fellow directors and all 144 employed staff, but also due to providing a luxury resource for people of all ages at affordable prices.

‘We are thrilled to receive this award’, he says,’ but we know that as number one Spa resort  we have to keep innovating and moving forward. We are well aware that we are closely watched by the industry, and what we do everyone else tends to follow.’ The resort, which operates both as a Day Spa and a Destination Spa, achieves 97% occupancy all year round which sounds a remarkable achievement, and they attract almost as many men as women. Once or twice each year they offer special discounted Spa Breaks – these are particularly popular and sell out very quickly. www.titanicspa.com