Some of you may know, or remember, Peter Metcalfe – a friend and colleague of mine at Settle High School.  For many years, Peter taught modern languages at the school and, later in his career, he became librarian there.  Peter has always been interested in the roots of language and in local history, and in 1992, after a good deal of study and research, he published a short book entitled ‘Places-Names of the Yorkshire Dales’.  The book refers to lots of place-names over a wide area but, with Peter’s permission, I’ve extracted some local ones that are relevant to the Rathmell website …..

Rathmell – The Red Sandbank – From the Old Norse words ‘rauthr’ and ‘melr’ spoken by Vikings in the 9-11th centuries.  There is a place called Rauthamelr in Iceland which emphasises the Viking origins of the name.  An early spelling of the name (1086) was ‘Rodemele’.

Giggleswick – Gikel’s Dairy Farm – From an Old English or Old Norse personal name plus the Old English ‘wic’.  Old English was spoken by the Anglo-Saxons in the 5-11th centuries.  An early spelling of the name (1086) was ‘Ghigeleswic’.

Long Preston – The Priest’s Farm – From the Old English ‘preost’ and tun’.  As Preston is a common name, ‘long’ was added for clarity – the village is a linear settlement.  The spelling in 1086 was ‘Prestune’.

Ribble – The Boundary – From the Old English ‘ripel’.  The river formed the western boundary of Craven.  An early spelling (715) was ‘Rippel’.

Wham – The Nook, or The Valley – From the Old English ‘hwamm’ or Old Norse ‘hvammr’.  Also a common Dales field-name.  A 13th century spelling was ‘Quane’.

Wigglesworth – Wincel’s Enclosure – From the Old English; personal name and ‘worth’.  An early spelling (1086) was’Winchelesuuorde’.

It might be possible to develop this short article into a more comprehensive list in the future.  Peter’s book is now out of print but he still has a few copies remaining ….. you can contact me if you’d like to buy one.

History of the Reading Room

The Rathmell Reading Room in the centre of Rathmell village was built by Laura Elizabeth Geldard in the first decade of the 20th century.  Prior to this the villagers had the use of a room at Cappleside, the Geldard family home, and a room in Chapel Cottage was also used as a reading room for a time. Minutes record billiard tournaments, a reading room, and discussions about a new reading room.  In January 1909, Mrs. Geldard showed the committee plans for a new reading and billiard room which she proposed to build the following year. 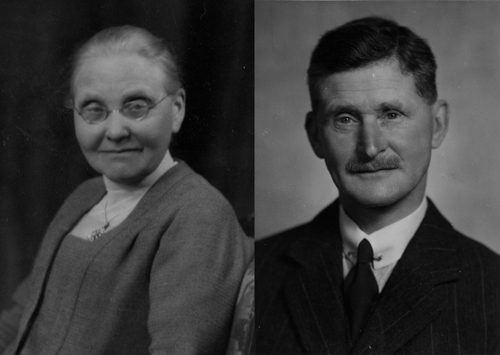 The Reading Room was formally opened by Mrs. Geldard in November 1910, admission 6d.  (there is some confusion as to the year as later a date of 1911 is recorded – however, as 1911 records show a lot of committee activity, 1910 is more likely).  Two days later a celebration dance was held, admission 1/-. Initially the room was used as a ‘reading room for daily papers’ etc., but subsequently came to be used as a Village Hall.  It has been available, rent free or at nominal rent, for use by Rathmell residents ever since.

1911 was a busy year – a stage licence was applied for, a caretaker employed,a piano and billiard table sought, subscriptions discussed, and, last but not least, a lock and key was requested for the WC. Among other activities over the following two years, cookery and dressmaking classes were introduced.  Maybe they were too ambitious or they did not get the support from villagers they expected as by 1912 the Reading Room was in debt and the committee accepted a loan from Mrs. Geldard.  They pressed on, but by 1915 had to sell the seating.  In 1916 a proposal to close until the end of the war was turned down and later, a compromise suggestion was agreed to close the Reading Room between May and November.  In August of the same year the billiard table and remaining chairs were sold for £17.0s.0d.

In November 1916, a well-attended public meeting decided to reopen and to raise funds by having a concert.  The next year saw a number of ‘social gatherings’ and by November a balance of £9.11s.7d was recorded after a proposal to send a Christmas gift of 10/- to men in the Navy or Army who were from Rathmell or had parents living in the parish.  In 1918 there was a report of profane language being used in the Reading Room but, in that year and the next, little use was made of the building in the summer months.  In September 1919 a Social Club was started which met weekly at Cappleside; a year later the venue was changed to the Reading Room.  Also in 1919 there were complaints of lads congregating in the Reading Room porch and harassing folk.  It was decided to ask Mrs. Geldard to put iron gates on the porch. 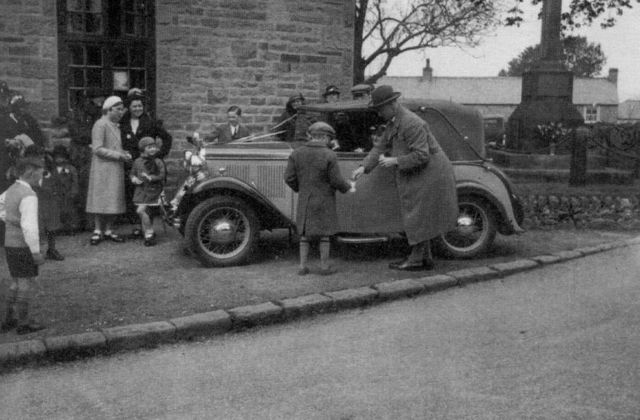 Colonel N. Geldard at Rathmell Reading Room, presenting a souvenir mug to James Taylor to mark the coronation of King George VI, 1937. Mrs L.E. Geldard, the colonel’s mother, is sitting in the car.

The AGM of 1923 passed a proposal to call a Public Meeting to ‘decide whether the Reading Room be carried on or closed’.  The Public Meeting voted against closure but obviously didn’t produce the necessary support and in November 1924 a decision was made to close until further notice.  Despite this decision the reading Room was kept open and closed only during the summer months.

This site uses Akismet to reduce spam. Learn how your comment data is processed.